It’s been two years since you took your last breath.

That hits me. Hard.

You were there, right by my side every single day for seventeen years of my life and one morning, you weren’t.

You were only eighteen in your freshman year of college. You had your entire life ahead of you. You were going to be a husband. A father. An uncle to my children. How could you dare to put your entire life on the line by letting the curiosity of trying heroin overcome your bright future? It hurts knowing someday I’ll have to tell my children they have an uncle that’s no longer here.

I now have nothing but old memories and it hurts knowing I’ll never create a new one with you. Some of them are incredible like dad pulling us around the lawn in a wagon he attached to his lawnmower and our little tree fort we made. To this day, some of your things are still in there. Some of the memories aren’t so incredible that I wish I could forget.

I had no idea how to process the news when I got it. I didn’t believe a word that was being said to me. I didn’t know how to stand. It’s like every ounce of bone in my legs disappeared because I found myself on the floor and couldn’t get up. I didn’t want to get up because I knew when I did, I would have to face the reality that you were really gone. You were my protection. From bullies, from dumb boys. Who was going to protect me now? There was no way I could do life without my other half.

It hurts. Every day. It hurts knowing that you were going to school to save the lives of little children who were sick and dying.  To be a pediatric oncologist. How could God take away someone that would someday heal His children and be such a great reflection of His light? You were going to give them so much hope.

I remember on the way to the morgue to see you for the last time, I was a hysterical wreck when I felt God silence me. It was my first real encounter with Him. At the time, I wasn’t even a follower but it was so evident that it was Him. There is no gentler, sweeter voice. Nothing in this world can compare to the voice of God. He said to me three words that will forever resonate in my heart. He said trust in me.

It wasn’t easy to trust in Him through such a dark time. To see my family fall apart was horrifying. Learning to trust Him through this time was a long process and what seemed like a thousand sacrifices, but it was so worth it to be made a new creation, inside and out. Physically, spiritually, emotionally, mentally. I chose to leave my broken past behind and chase after what great things He has in store specifically for me. You saved me. Without you, I never would have encountered God in the way I did. I never would have traded my selfish, sinful heart for a servants heart.

So many people have been impacted by your story. Your best friend who gave you the heroin is now clean after a long journey and I couldn’t be more proud of him. I never thought after the months of hating him I would feel so privileged to call him a brother, and not everyone can fill that role. He’s been such a huge supporter and an incredible friend. I was so wrong about him. He’s truly the greatest.

In the midst of the pain that no one could possibly understand, I’m comforted by the fact that God doesn’t always expect us to be put together, He understands when we fall apart and sometimes allows us to crumble so we can be made whole again. So we can let Him fill the cracks of our broken heart. So His light can shine right through.

What the devil intended for bad, God used for good. He may have won the battle by letting the heroin overcome, but lost the war because I overcame.

Now instead of being weak at the knees from the pain, I get weak at the knees in the presence of the Holy Spirit. Sometimes, His love is so overwhelming that I just want to collapse. I never in a million years expected to experience something like that. It’s something this world absolutely cannot offer.
Don’t get me wrong, I still feel the pain like no other, but it’s different than the pain I felt before Christ because I know my suffering has and will lessen the suffering of others.

Today is a celebration because you’re home. You’re where you were meant to be all along. I can’t wait to see you again and tell you about all of the things I’ve been doing for God’s kingdom.

I love you endlessly, Seth Paul. 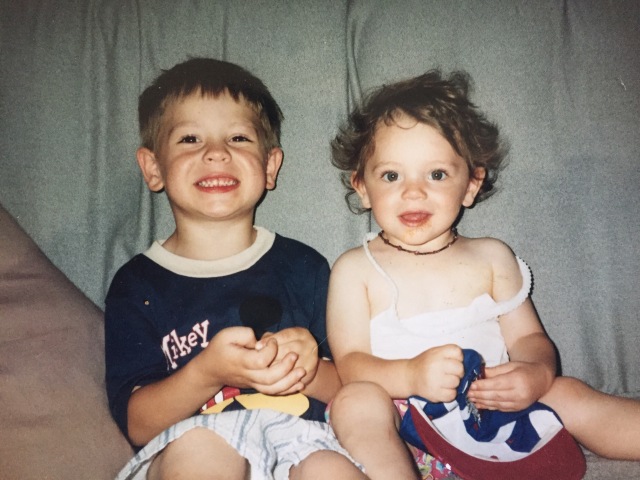 5 thoughts on “Dear My Big Brother”